Some Thoughts on Dance Archiving 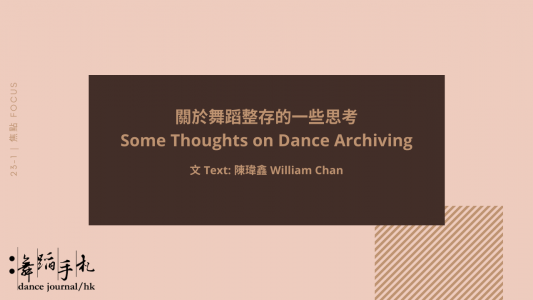 In recent years, the idea of ‘decluttering’ has become more popular. This makes us think about what to keep and what to get rid of. Nevertheless, when we decide what we will or won’t keep, the decision doesn’t only hinge on the sentimental value of the old items, we have to consider their cultural and historical value as well. Take the century-old underground service reservoir in Shek Kip Mei. Today it seems like just an abandoned place, but when we look into its design and architectural value, we all agree that it deserves conservation. Whether for objects or buildings, we need space for preservation. As for the performing arts, especially dance performances, with their fleeting nature, how can we record and archive them so as to aid researchers in the future?

The limitations of video-recording as archiving

First, we have to clarify a few concepts. For many people, in an age where everyone can record videos on their phone, shouldn’t we just record live performances on camera for archival work? Of course, this serves the purpose of leaving a record. The camera can record live performances on stage with high resolution, yet the video recording cannot capture the performance as a whole with the same clarity. After all, a crucial element of live performance is the rapport between the performers and the audience, and dance also emphasizes the relationship between body and space. The current 2-D form of filming and projecting on screen cannot capture the alternation of rhythms in a 3-D space, not to mention how the camera movement and editing affect the perception of the viewers.

Due to the limitations of the 2-D form and image size, the spatiality of the performance on stage is weakened. If we are not on site, viewing the performance solely through the camera may sometimes be an alienating experience. The energy of the performers will be unavoidably lost. Besides, watching recorded performances on digital devices will be different from watching them live in terms of sound and image. We may all understand that music and sound recording for live performance requires professional equipment and techniques. But when dance performances are filmed on camera, the significance of sound recording is often neglected. We mainly focus on the dancers’ gestures and movements on stage. Therefore, the recording doesn’t really address all five of our senses. Moreover, there is a stark contrast between viewing on screen and on stage – the colour tone transmitted through the camera is sharper, the light contrast is stronger – which makes the recording watched on screen more theatrical.

Organizing a comprehensive range of records for archiving

As a result, recording on camera is only one way of archiving dance performances. When we wish to extend the afterlife of a dance performance, allowing people to revisit the piece, we need to collect records from different stages of the production. This enables us to archive (verb) and thereafter organize the materials into an archive (noun). These records include but are not limited to the artistic concepts, creative notes, movements or rehearsal records (both in videos and photographs), drafts of the scenography, set and costume designs, the details of lighting, sound and projection design, as well as the prompt book prepared by the Stage Manager etc. Many of these materials from the early stages of production are disregarded and disappear after the performance has taken place. Even if the dance companies file such materials, there are not enough resources for continuous and systematic filing to further archive the materials for people to browse, revisit or research. They can only lie in a drawer gathering dust to wait for people with sufficiently keen interest to uncover them.

So, how can we organize these materials which come from dance performances? How can we file and archive them? This requires specialized skills. One method of archiving is to first organize the records into different categories, then label them with metadata, just like the way we label hashtags in our posts on social media. The labelling process serves to indicate the theme, authors and relevant key words etc. To build a successful archive, the researchers must have unified checking tools and a shared mentality. They have to insert metadata for all sorts of materials collected, which will help archive and research work in the future. Thus, while building the archive or even before the archival materials are produced, we have to imagine how future researchers will utilize the archive.

Dance performances differ from theatrical or musical performances. Records of drama and music can be preserved through video, audio or text. For dance, the inner state of the dancers and the subtlety of their movements cannot really be recorded. Hence, in order to archive dance classics, preserving the materials that come from different stages of production is not enough. That would mean putting a living work into a dead box. We have to keep the work alive in order to preserve it. Dance can only be passed down through mentoring by previous generations. New dancers will learn the movements and rhythms. Bodies serve as the transmitters of history.

To build a dance archive for a city, preserving performances alone is not enough. More importantly, we have to let more people view the materials, so we can explore the history of dance from a wider perspective. This will involve relevant parties sharing knowledge, or independent researchers writing. Awareness of this has recently grown. For example, in 2019 two books were published – Dialogues on Dance: Hong Kong Dance Oral History (1950s – 1970s)[1] and Hong Kong Contemporary Choreographers Research 1980 – 2010: Hong Kong Contemporary Dance History, Aesthesis and Identity-Searching[2] - which are important for local dance history. Since oral history relies on the interviewees’ memory, it is hard to trace back in terms of accuracy, but at least it captures the historic development when archival materials are lacking. It is also about preserving those memories before they fade.

To preserve historical materials, extra resources are needed. Yet, as this is not financially profitable, it is often neglected. Funding bodies won’t give extra grants for this kind of work. Local universities do not have relevant institutional units. So at present it is almost impossible for us to work on dance archiving in Hong Kong. For a long time the local performing industry has called for the creation of a performing arts archive, providing a space for the industry and researchers to organize various materials. They have aimed to curate various events to raise public awareness of performing arts. Nonetheless, the arguments put forward have failed to persuade the government to take any action.

While an official archive is yet to be established, in the short term all we can do is to rely on arts organizations and individuals to preserve materials on their own, and to publish the resources online later on. During this time of the pandemic, arts organizations around the world have come to understand the significance of online archives, especially in using them as a way to connect with audiences. The only concern is that production contracts might not include the terms and rights of online distribution. Many dance performances use music which is not original. So when the work is shown online, this involves another round of administrative work to deal with copyright issues.