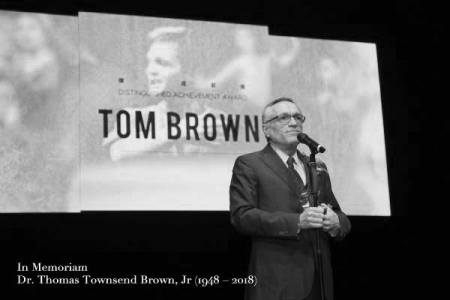 The Hong Kong Dance Alliance is saddened to announce that its Executive Committee Member and Chairman Emeritus Dr Thomas Townsend Brown, Jr, passed away in the morning of 18 November 2018 at the age of 70 after a battle with cancer. Tom Brown, as he always preferred to be known, was one of the founding members of the Hong Kong Dance Alliance in 1994 and served in a variety of roles. From 1997 to 2006, he was Chairman of the Alliance and remained a member of the Executive Committee until his death. He was also instrumental in founding dancejournal/hk , which he served as Editor from the first year of the publication in 1998, as well as the annual Hong Kong Dance Awards which celebrated their 20th anniversary this year.

Following a successful career as a dancer and choreographer in his home country, the United States, Tom moved to Hong Kong in 1985 to join the newly-formed Hong Kong Academy for Performing Arts where he taught for 30 years. He first joined as a Principal Teacher of Modern Dance and rose through the ranks to become Head of Modern Dance, Associate Dean of Dance, and Dean of Graduate Education, before retiring in 2015. During his time as Dean of Graduate Education, Tom led the development of Master of Fine Arts degree programs in Cinema Production, Dance, Drama and Theatre, Entertainment Arts, as well as the Master of Music degree and built a solid foundation for the programs.

Tom’s honours included the Hong Kong Dance Awards Distinguished Achievement Award in 2015 and an Honorary Doctorate from the Academy for Performing Arts in 2017.

A passionate dance artist, educator, and scholar throughout his life, Tom nurtured generations of local dance artists and made an immeasurable contribution to the development of dance in Hong Kong. His energy, commitment and charisma will be missed by everyone who knew him and had the good fortune to have worked with him. Our thoughts are with his family and friends at this sad time. A memorial service will be held by the Alliance, details of which will be announced soon.